A Brighter Future For Sierra Leone 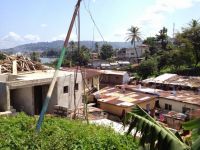 I just returned from Sierra Leone, my first time back in 40 years since I was a student at Fourah Bay College in Freetown during my Junior Year Abroad.  While some aspects of life in Sierra Leone have improved, I was shocked to see how much of it seems worse.  Daily power outages lasting up to three months, only 20% of those living in the capital city have running water and no potable water from taps.

The roads are the worst I’ve seen in any urban area anywhere on the planet.  I either saw – or was in – an accident every day.  There are improvements.  A new paved two-lane road was recently built by the EU from the capital to one of the larger towns.  Cell phones have improved communications and lessened some of the frustrations of constantly bumping up against businesses and systems that don’t work well.  After 11 years of civil war, peace is a precious treasure now in Sierra Leone.  The President of Sierra Leone is getting good marks for his leadership and direction.  The Truth and Reconciliation process the country went through after the war has encouraged a culture of taking responsibility for your mistakes and asking for forgiveness.

Western-educated Sierra Leoneans are beginning to return to put their educations to work to improve the country. The RISE Network, our partner in Sierra Leone, is led by Dr. Bidemi Carrol, who was educated at Brown and Stanford, then moved back to Sierra Leone, where she is working at the World Bank and helping start libraries with us. She inspires me.

One encouraging sign is the development of many new schools.  Over 1,200 were lost in the war, creating impossibly long distances for students to have to travel to get to a school.  Communities have taken the initiative to build or begin their own school, paying for the school’s construction and the teachers’ salaries. Hamilton Community School is one of these.  It is a one-room school with about 90 students, ages 3-13 years old. The students sit at different table according to their ages. The school was originally just a preschool, but has begun expanding to primary school students.

I visited Hamilton Community School just after they received their books from ALP. The students are totally digging them and are very appreciative of this gift from the Powers family of Ridgewood, New Jersey. The Powers family got their “power” from many people in their community, including Hawes School and Ridgewood Library. Therese Powers says, “Libraries are such very special places that bring the world to people and nourish minds and imaginations no matter what the situation. I am so happy to be involved with ALP.”

Here is one story of amazing good grace being bestowed upon a child in this village by one of our partners; ALP is glad to be a small contributor in the story, via our books: Theodora, a board member of The Learning Foundation, one of the RISE Network member organizations, grew up in the village where Hamilton Community School is located.  Theodora was visiting her mother and found the little boy in this picture, naked and severely malnourished. His name is Salieu; he was 4 years old.

He was being cared for by his aunt, for his parents were teens who had no capacity to provide for him. Theodora “adopted” him, buying food, clothing and paying his school fees.  The boy lived with her mother until she passed away. Theodora now pays a relative to care for Salieu and continues to visit him and pay for all his expenses. As for his education, Theodora enrolled him at the Hamilton Community School in 2011. He has learned the alphabet, basic counting and above all, to obey instructions and to stop scavenging for food. He will turn 7 in February and is improving gradually. Salieu’s future looks even brighter today – and we are happy our books can make a difference in his life.
We are recruiting book drive organizers right now. Won’t you make a difference too, and start a library in Sierra Leone with ALP? All it takes are 1,000 gently used books and $500. Learn how to get started here: