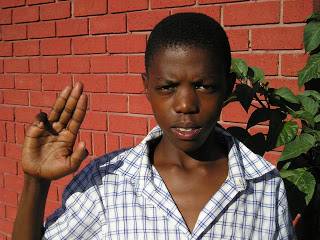 Remember the movie “The Gods Must Be Crazy”, a story set in Botswana about a man from the San (Bushman) tribe who spoke a click language and found a Coke bottle in his native land? Now, fast forward to today – and a boy from this semi-nomadic hunter-gatherer tribe who, powered by his own ingenuity and aided by books from the African Library Project (ALP), went on to be an academic superstar.

This is the story of Ketelelo Moapare. African Library Project has had the privilege of touching his life by giving him his first access to books when he was 12, in a library begun by Ed Pettitt, a Peace Corps volunteer in Ketelelo’s village, New Xade, Botswana, in 2007.

It’s 2006. Peace Corps volunteer Ed Pettitt arrived at his assignment in New Xade, a remote village in Botswana. He is assigned to work with the San tribe, a tribe seeking a new way of life. A very important part of the new life was literacy. Ed knew that the village needed a library, so he started searching for ways to deliver one. Through a contact at the Peace Corps office, he got in touch with Chris Bradshaw, ALP founder. “I hear you can help me get books for my library?” Fast-forward to August 2006 – (proposal written) and November 2007 – the grand opening of Yiaghuisi Community Learning Centre. Botswana’s Vice President Ian Khama flew in for the festivities, which included a marching band of local Boy Scouts. There is a link at the bottom of an 8-minute video tour of Yiaghuisi Library given by Ketelelo.

12-year old Ketelelo stopped by Ed’s house in New Xade to visit the strange new visitor from America. They bonded immediately. Ketelelo displayed a natural talent and intuition for manipulating mechanical things while there; he saw that Ed had a solar panel-powered fan that wasn’t working. Without ever having seen a fan before, Ketelelo took apart that fan’s motor, put it back together, and got it working, earning himself the nickname, “The Bush Mechanic.” When Ed started New Xade’s first-ever library with books from ALP, Ketelelo helped unpack the sacks and sacks of books, and became an avid reader in the process.

He went on to get the best grades in school and was first in his class when he graduated from secondary school. Ketelelo’s success is even more impressive when you learn the full nature of the challenges he faced – he is an orphan – he lost his mother when he was just a few days old and his San tribe, known as the “G//ana,” is a minority group in Botswana, whose members are not usually known to complete their schooling – his community had little reason to believe he would succeed. Ketelelo says: “My background (being an orphan and coming from a minority ethnic group) is motivating me.”

Ketelelo had years of success in his elementary school in New Xade, called K’Joe Primary School. More success followed in high school, culminating in his admission and full scholarship to the elite Mara-A-Pula School to complete his “A-levels.” After graduating first in his class from high school, Ketelelo was invited to Botswana’s capital city, Gaborone, for an award recognizing his academic achievement, which included a full scholarship to any university in the world!

Here is where the magic started kicking in through some amazing coincidences. The ceremony was officiated by the President of Botswana, Ian Khama – who was Vice President and in attendance at the ALP library opening back in 2007! But even more of a coincidence was that Ed happened to be back in Botswana for a short business trip related to his work with the Baylor International Pediatric AIDS Initiative during Ketelelo’s award ceremony. They had a warm reunion. Ed was able to enroll Ketelelo in his A-levels program and is now acting as Ketelelo’s guardian and helping him apply to university engineering programs.

Ketelelo looks back and says “Ed (Pettitt) instilled the culture of reading into me through the establishment of the Yiaquisii library with the help of the African Library Project”. Ed, Peace Corps Volunteer and Ketelelo’s mentor, looks back and says: “The establishment of a community library in New Xade with books from the African Library Project was a huge turning point in Ketelelo’s life: for the first time, he was able to satiate his hunger for learning with access to a wealth of knowledge in the form of donated books from America. Ketelelo was the library’s first patron and spent all of his high school vacations and holidays with his nose in the books. Now, Ketelelo is serving as an example for his entire village, inspiring the younger generation with his love of reading and academic success. Surely, Ketelelo’s story will be the first of many such success stories that can trace their beginnings to the grassroots literacy work of the African Library Project.”

VIDEO: Here is an 8-minute video tour of Yiaghuisi Library given by Ketelelo in 2009

Find out how you can change lives, book by book, with African Library Project by building a library like the one that helped educate Ketelelo. Start a Book Drive Today!

Do you have a story of the impact of ALP to share in a blog? Email info@africanlibraryproject.org to submit your idea.