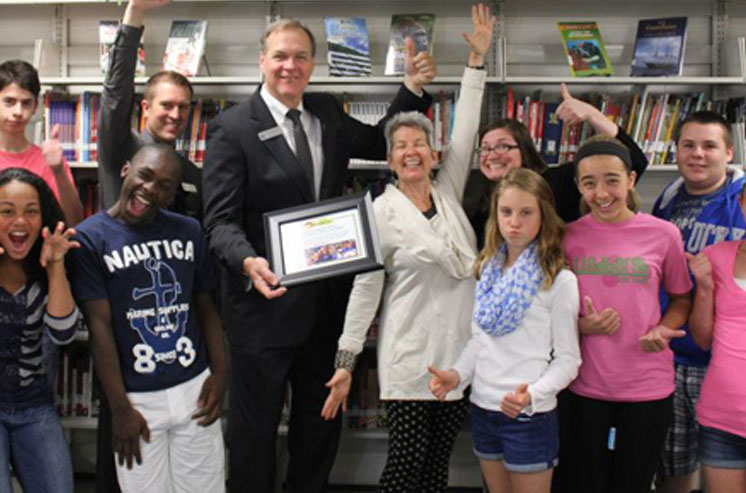 “When you see such a need, it’s an easy decision to get involved,” said Amy Sears, Librarian at Sperreng Middle School. “Once the community found out about our drive, books came in from everywhere. It was amazing.”

In fact, community support was so strong that the Sperreng Middle school students exceeded their original goal of 2,000 books and $1,000 for shipping costs for two libraries, and instead collected 5,400 books and funds to ship them, creating five libraries which will serve 1,500 students. With the surplus of books and donations still trickling in, Librarian Sears thinks they might be able to go for Library Number Six!

Part of what spurred the energetic support may have been the zany, creative and varied fundraising ideas that anchored Sperreng’s Spirit Week:

For example, on Tuesday, it was student vs. teacher teams at dodgeball ($5 donation for your team). On Thursday, after school, it was pie throwing (contribute $5; hit your favorite teachers with pies). This was truly putting life and limb in the line of fire for global literacy!

On a more serious note, Librarian Sears pointed out that the book drive efforts opened onto a wider agenda: “The students learned about Swaziland, and they see how their actions impact others. It’s about more than just collecting books; the students make a connection with the people they are helping. They also wrote books themselves to include in the boxes and decorated the boxes so that when they arrive, it will be like receiving a gift.”

Sears documented this entire process in a wonderful video, “Our Journey to Build a Library”, which is a gift to her students, congratulating them for their work, and describing in detail the schools to which the libraries are going and the communities where these schools are located:

Sears has produced a beautiful document for building connection between the American students and their Swazi compatriots.

Sears’ video ends by reminding students that there are still more libraries needed, and encouraging them to do their own book drives. If you would like to do this “wonderful thing” and “give the gift of reading to someone” just let us know! Catch the wave!