Five years of reading can make a difference 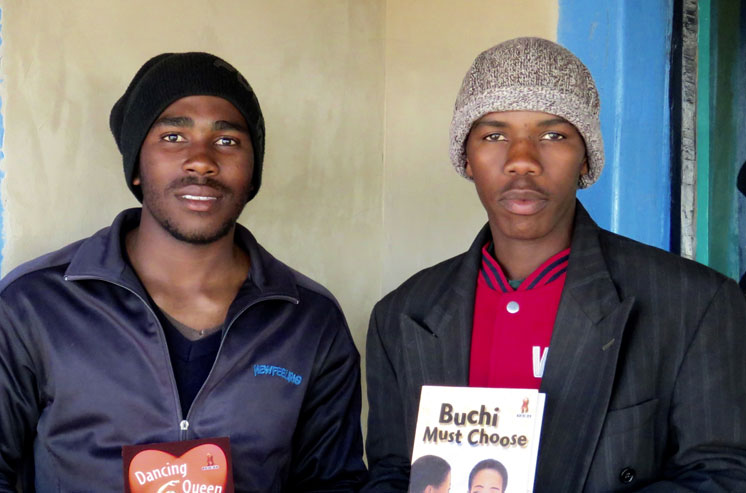 This is the third blog from Ashley Kahn about her recent trip to Lesotho with Amy Jo Carson, ALP’s Lesotho Country Liaison.

The village of Bokone is special to Amy Jo Carson. A part of Amy’s heart belongs to the Majara family, their house and village, as that’s where she resided the first three months of her Peace Corp deployment. While she was there, she read with the Majara family and with children in the village.

With the support of Morena Majara, the Chief, Amy helped Hangar’s Hope Secondary School apply for an ALP Library. Then Amy’s family in Texas and Colorado organized the book drive for Hangar’s Hope. When the village received the books in 2012, they were divided up into small classroom libraries where they could be used by students and teachers alike.

Five years later, I traveled to Bokone with Amy Jo to visit our Basotho family and interview students that have benefitted from ALP’s library. Members of the Majara family said that reading books has helped them learn English and is now an activity that they will teach their offspring. Reading these books has inspired the youngest Majara family sister to become a Geography and English teacher. Their cousins, Bohang Thatjane and Tlotisang Thatjane, currently attend Hangar’s Hope Secondary School.

The primary school became a government-funded requirement in 2000, so many herd’s boys like the cousins started their education in their early teens. Bohang’s and Tlotisang’s favorite book is “Julius Caesar”. It has inspired them to learn more about democracy, freedom of speech, and their government. They both want to become journalists.

The boys also extensively spoke to us about the importance of HIV/AIDS education and literature. By showing examples of how HIV positive youth succeed, the books inspire confidence in those affected and reduce the stigma attached to HIV/AIDS.

The Carson-Kahn family will continue to organize book drives and volunteer for the African Library Project.  We are currently organizing book drives for two more schools in Lesotho!