From Newbie to Pro: 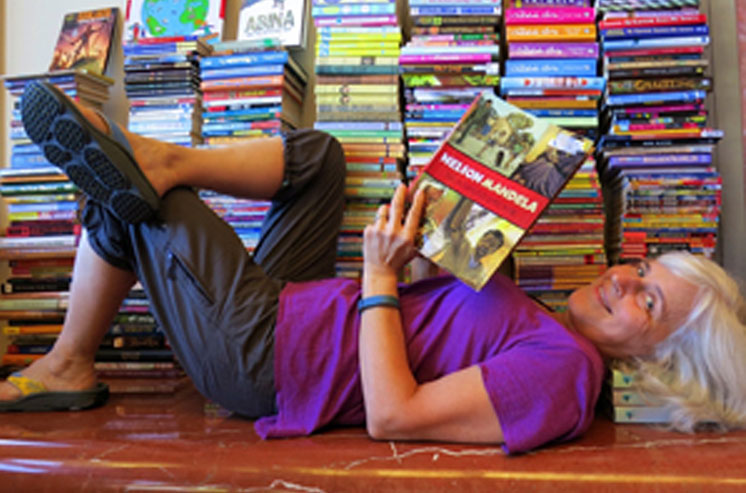 Carol Younge was astonished. For years, she had been a donor to ALP, volunteering at newsletter stuffing parties, fundraisers, lending a hand when she could. She had always wanted to do a book drive herself, but thought you had to be connected to a group — a school, a troop, a church, a company — to do it. “I thought it was too big for one person,” she said. Then she met Coy Cross, a senior who has done 10+ libraries himself, at a book packing party in Berkeley.

How did you do it?” she asked Coy.

“What do you mean, you just ask people?”

“Whenever somebody says, ‘What’s up?’ I tell them that I am collecting books and money to start libraries in Africa. Everybody helps and gets their friends and family to help too.”

She was astonished. She drove home and immediately signed up to do a book drive.

“Collecting books is not the hard part,” she told me, as she was finishing up her first library for Lesotho. “We live in a culture awash in books. There are so many, they get thrown out. The number of books discarded is sobering…. It’s choosing your 1000 books, culling them, putting together a library that becomes the challenge: finding the right books for your library.”

Carol actually discovered some amazing techniques for finding the right books. Powell’s Books (www.powells.com) which advertises itself as the largest independent new and used bookstore in the world, is only one of the bookstores that buys used books online and gives you cash or credits for buying books of your choice (Bookbuyers, www.bookbuyers.com, is another). “You save up all your books, especially adult books and textbooks, ship them in and then trade them for titles that you want.”

Batching this way gets you free shipping on the books they send you. “You can take anything and turn it into a book that you really want,” says Carol.

Another great resource is the ‘Friends of the Library’ for your community library.  “They do big sales,” she says, “and often will give books away post-sale if they understand you’re doing non-profit work. I picked up 100 books at a Los Altos Friend’s sale.”

So not only was the task NOT too big for one person; she ended up with 1500 good books at the end of her book drive, and is thinking about turning those 500 ‘extra’ books into a second library. “I haven’t told Chris yet,” she said with a sly grin.