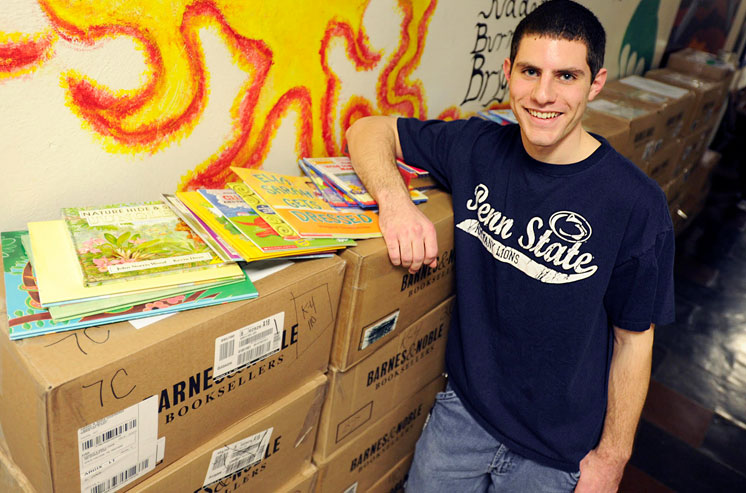 “As I reached out to my hometown and books came in,” Mike said, “I realized I had too many books and needed to organize my own drive out of my home town in Roxbury, New Jersey as well.”  He led book drives three of the four years he was at Penn State, collecting books there and in his home town.

After college, he returned to Roxbury where he teaches high school Earth Science and Physics.  As an advisor to the Key Club, he works with club members to conduct book drives.

In his years as a book drive organizer, Mike has collected 90,000 books and created 68.5 libraries.  “It’s a lot easier than it seems.  People are eager to help.”

While at Penn State, Mike involved campus clubs in collecting books. He spread the word by word of mouth and Facebook to the campus, the University Park Community and local schools.  He also got the word out in Roxbury.

Family and friends donated money for shipping and mailing.  His mother’s work colleagues were generous, and her company matched donations.

During his first year at Penn State, he collected 11,000 books at Penn State and another 10,000 in Roxbury. He was gratified by the community’s generosity each year, but all the books meant a very full bedroom in Roxbury and a scramble for closet space at Penn State.

When Mike began teaching in Roxbury, he wanted to continue doing book drives.  “As a teacher, I value the importance of education. In the United States, we take books and education for granted. Focusing on a cause like this helps bring awareness”

He tells the Key Club members: “Think about everything you have in the room.  Then imagine a classroom with nothing, not even windows and doors.  Some of the classrooms I encountered when visiting Africa were lacking everything, which proved why it was so important to collect and donate books.”

The Key Club does not have to do a lot of advertising about the book drive.  The Roxbury community knows where to send books.  “Everyone has children’s books.  They come pouring in.”

“We don’t have many great fundraisers,” he says. “One thing that is fairly successful is duct taping a teacher to the wall.”

Students help with sorting and packing books. Mike recommends, “Sort as you go.  If you are creating more than one library, you will need to sort into primary ((up to 4th-grade reading level) or 4th through 8th reading level.”

He has also found that when he is sending more than one library at a time, it is less expensive to use a shipping company to mail the books to New Orleans instead of US Mail.

The Key Club members get a lot out of their involvement in the book drive. “It is a tangible project,” he says.  “It has meaning and weight.”

Mike’s commitment to book drives was strengthened when he attended the ALP Partner Summit Malawi in 2013.  He saw the conditions of the schools, where some doors had been burned for wood and classes with 100-150 students.  He reflects, “I got to visit one library where we had donated books. It was cool to see books being used and see the teachers’ and students’ gratitude.  I saw the impact of the libraries and why we do it.”

For anyone thinking about signing up for a book drive, Mike urges them to do it.  “Don’t shy away.  It is easier to do than you think.  It is easy to coordinate, and people are willing to help.  They want to do something to make a difference, but don’t know how.”

Creating a library can make a difference.