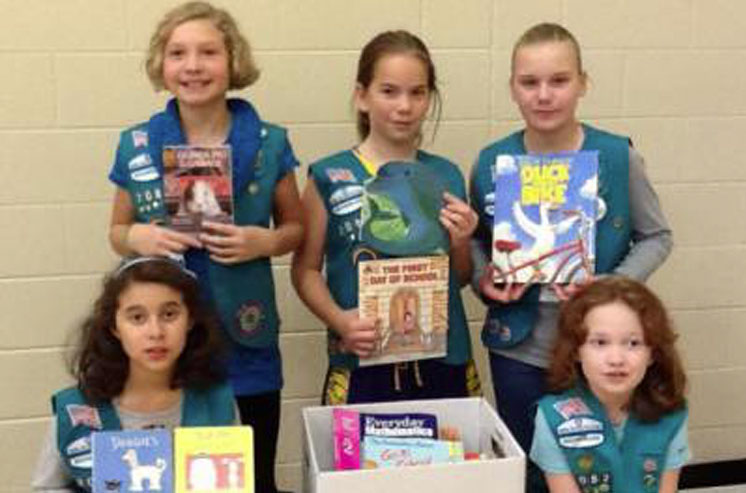 Eighteen girls from Madison, Wisconsin learned that they have the power to change the world. They also now see that no matter how limited our resources sometimes may seem in the U.S., we are fortunate compared to circumstances in underdeveloped countries and we can always find ways to make a difference. Read the story of Girl Scout Troops #2082 and #1163 and be truly moved and inspired!

Ranging from 2nd to 5th grade, the 18 girls of Troop #2082 and their sister troop #1163 collected over 5,000 books between 2012 and 2014. The generosity of the girls is even more notable because they’ve learned they can contribute despite their own economically challenging situation – and they can become empowered by doing so. These schools are in an economically challenged area, where 50% to 75% of the students qualify for free breakfast and lunch and students may receive free school supplies, coats and dental care. Troop Leader Sheila Lenius says, “One of my goals was to let them see they can make a difference and change the world.  It’s consistent with parts of The Girl Scout Law  – to make the world a better place, to be considerate, caring, friendly and helpful.”

The girls of Troop #2082 and their sister troop #1163 attend these elementary schools: Emerson, Sandburg, Lindbergh, Schenk, Lake View, Gompers, and Mendota.The school principals, teachers and staff have been helpful.  Emerson Principal Karen Kepler initially thought of the penny drive, one of their fundraising strategies.  She also okayed bulletin board displays and classroom presentations about the book drive and the math lesson of counting money.  Many teachers have excess books they no longer want, and an anonymous donor from the school has helped financially.  It has been a balancing act to meet the needs of a low income school along with a book drive.  Emerson School has a weekly program where kids come to do an activity and then they get to take a free book home.  It’s been an education for the community to learn that even under these circumstances, volunteerism and giving still makes sense.

The most recent book drive will be the basis for the Bronze Award for the Junior Troop #2082.  The earlier book drives were done as service projects. The ALP book drives have been a way to give the girls lessons that they might not otherwise get:

Learning about multiculturalism– both in the U.S. and Africa. Regarding multiculturalism in the U.S., their book drives are centered from Martin Luther King Day to Black History Month.  Beyond our borders, a Girl Scout volunteer whose daughter was a missionary in Sierra Leone spoke to the girls. Immigrant children at Emerson enjoy that multiculturalism is an important fabric of the culture of the school. Children from Central America, Mexico, Africa, Tibet and other parts of the world are schooled in Madison, it is a very diverse city.  There are even more cultures represented with the University of Wisconsin attracting people from around the world.

Gaining a world view (maps, geography lessons, etc.) Sheila uses maps and globes when she talks to classes. Girl Scouts have made bulletin boards that were on display in the hallway.  These profiled the country that the books went to.  The troop even received a thank you letter from the school in Swaziland who got their books – really rewarding!

Growing comfortable talking in front of groups as they solicit books and donations. Three girls have spoken to classrooms and given presentations to gather books.

How to raise money. The girls did a “Penny Drive” at school in the 2nd through 5th grades.  Students collected and counted pennies.   The Girl Scouts also donated some of their cookie profits and had a bake sale.

Girl Scout Troop #2082 and #1163’s association with the African Library Project has empowered and educated the girls and the community.  Traditional chores and community service seem to be decreasing as young people’s lives are busier, Sheila observes. Yet these Girl Scout troops have done food drives and a personal pantry drive as well as making blankets for the Children’s Hospital in Madison, in addition to starting four libraries with ALP.  To see books make a global impact has changed the way our community sees the world.  Sheila says “I understand people here may be poor, yet we saw that we could make a difference in the world – that kids could make the world a better place. I think it’s wonderful that through the African Library Project, books can go to Africa.”