Giving Thanks – A Tribute to BDO Eldon D. Snyder 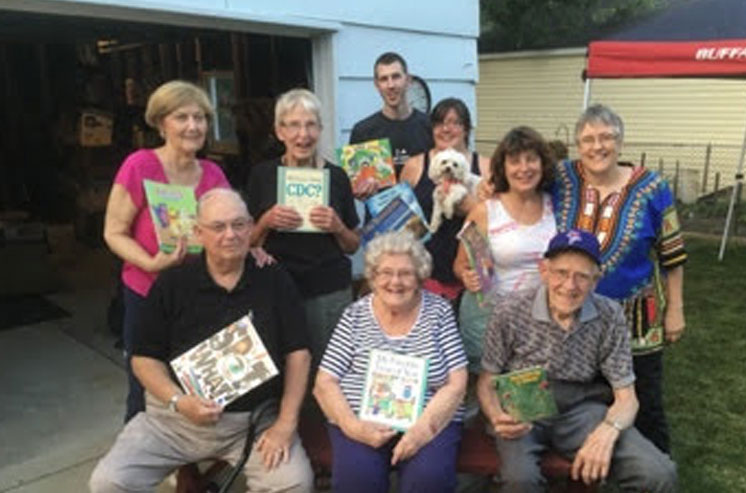 This is a story about books, Africa, libraries, and my dad. Just a few weeks ago my dad turned 94 years old. While his health has recently started to fail, he continues to find ways of supporting the African Library Project. As a retired educator, I seem to have fallen into an almost full-time volunteer job (for at least the next few years) collecting books, making libraries, fundraising for libraries, and speaking to schools, churches, and other organizations to encourage and support them in establishing libraries for Africa. But having had a hand in many, many libraries in the past 2 ½ years, I could not be doing this all alone!

My number one supporter through it all has been my dad. When I started writing this article in late April, he was sitting at the dining room table, wracked with pain, yet writing upbeat notes of inspiration on the papers that go inside each box of books. Over the past 2 ½ years, he has helped pack numerous boxes of books collected from his church congregation as well as solicited the parishioners to contribute to the shipping funds. He has contributed from his own savings to ALP so I could ship “just one more” library of books. He held a summer packing party in his driveway complete with snacks for volunteers. His basement became a storage facility for hundreds of boxes of books just waiting to be shipped. Only last year he helped me transport those packed boxes to the post office.

Though a quiet and unassuming man, I know he thoroughly enjoyed my exuberant retellings of my adventures and my sharing of photos after returning from a Kenya library delivery trip. He was so proud he had played a part. Now it’s early June, he has been hospitalized twice, spent two agonizing weeks in rehab, moved out of his beloved home and into assisted living to join my mom, and is awaiting hospice services. My dad served as a pastor in the United Methodist Church for over 60 years and is beloved by many in that role, but his enthusiasm and support, in these last years of his very full life, for my retirement dream of making libraries in Africa was something I will remember with great fondness and admiration! Thank you, dad! I wish that on this Father’s Day every citizen of the world could be blessed with a dad as special as he is to me.

A Note from ALP Staff: Unfortunately, Eldon D. Snyder passed away on June 16, 2019. We were constantly in awe of Mr. Synder and his family’s volunteer work and honored to have had the opportunity to share a piece of his story. Eldon Snyder will never be forgotten by ALP’s community. The books he tirelessly collected and the student libraries he helped to create will live on.