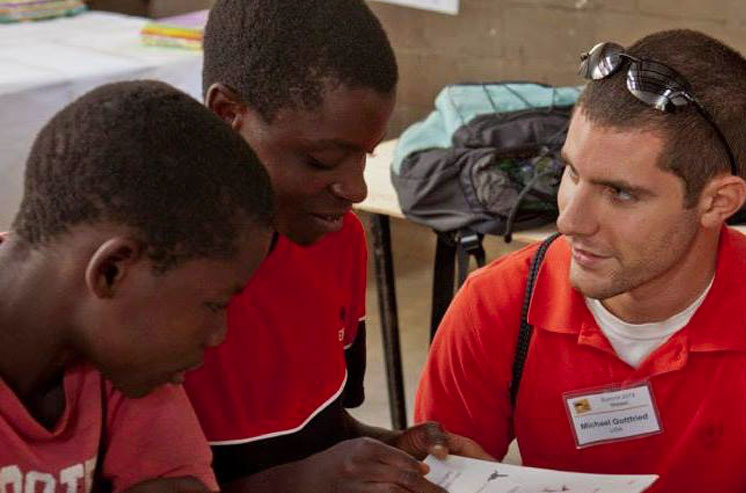 It was a crisp fall afternoon in October 2009, when my professor, Dr. Jim Nolan, asked our Education Freshman Seminar a question that would not only influence my Penn State experience and impact my life, but change the lives of many others as well.

Dr. Nolan explained how a former student was working in the Peace Corps in Lesotho, and how his school was in dire need of books to help improve the quality of education.  That student reached out to Dr. Nolan and explained how an organization called the African Library Project helped schools like his, and he encouraged Penn State to get involved.  On that autumn afternoon, Dr. Nolan brought the idea to our class, explained its impact and pitched the idea to us.  He asked, “Who is willing to step up and take the lead on this?”

I don’t usually make decisions or commitments that quickly.  With a split second to decide, I chose to take the risk and raise my hand.  As a future teacher, I couldn’t turn down the opportunity to help others, while helping improve education.

As a freshman in college, it seemed like a daunting undertaking to organize a book drive, but after things started rolling I realized how easy it was.  We started putting out the word on campus, in the surrounding community, and in the State College school system.  The donations started flooding in.  While our success at Penn State took off, I decided to reach out to my hometown, Roxbury, NJ. With the help of our high school Key Club and some elementary schools, the books started pouring in there too.

Originally, I had the intention of driving the books back after spring break, but the overwhelming success made that unrealistic. As a result, I operated a second drive out of NJ with the help of my parents.  Both drives wrapped up in the spring, collecting nearly 22,000 books.  We brought in 11,500 on campus and another 10,200 in NJ which started 19.5 libraries.

My sophomore year I managed another drive from a distance, collecting 4,500 books in Roxbury, starting another 3 libraries.  Rather than shipping them, however, my dad and I took a road trip to deliver them to New Orleans.  It was an awesome experience to see the other side of how the books are received, repackaged, and put onto the freighter for Africa.

During my junior year, I made the decision to start a club on campus called Penn State’s African Library Project. We earned club status from the university and had 20-30 members consistently. We gained support from many other student organizations on campus and received a lot of publicity for our work. During our first year, we collected 13,000 books, followed with another 16,000 during the club’s second year, shipping a total of 25 libraries across the 2 years. After I graduated, the club lived on for a few more years and started several more libraries.

In 2013, I was hired by my alma mater, Roxbury High School, to teach Earth Science and Physics. In late October 2013, I found myself attending the ALP Summit in Malawi, serving as a BDO representative because of my significant involvement… what a life-changing experience!

I saw first-hand the impact of our hard work, felt the genuine appreciation from the students, teachers, and librarians, and experienced the African culture. What was even more awesome was visiting a library Penn State had helped start. It was pure coincidence, but an extremely rewarding and humbling opportunity. Sadly, the trip was over as quick as it came, but I still keep in touch with many of the contacts I made, and the impact of the trip still resonates with me today. Upon my return, I shared my experiences at a faculty meeting and a Board of Education meeting, as well as with my students. My drive that year, with the help of my students, collected 6,000 books and started 5 libraries.

Doing these book drives have become routine for us as organizers, but the impacts are still very real and significant for everyone involved. I highly recommend others take that chance to get involved, as I did on that fall afternoon. Not only are you helping global citizens improve their education and way of life, but also doing so has a significant personal impact as well. ALP’s motto still rings true, as we continue changing lives, book by book.