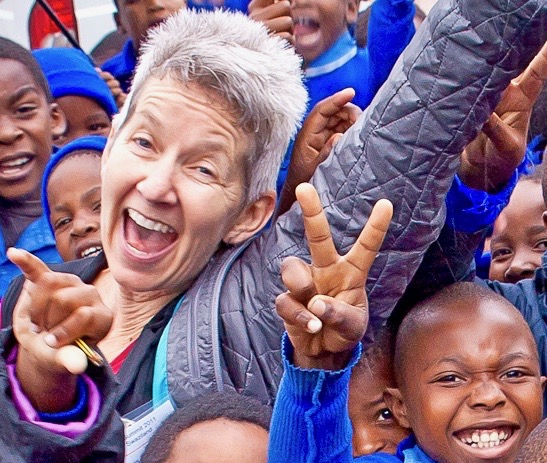 Chris Bradshaw has had a connection to Africa since she spent her junior year studying at Fourah Bay College, part of the University of Sierra Leone. She wanted to help the communities she visited, but wasn’t sure what to do at the time. It wasn’t until years later that the idea for African Library Project came to her. “I wanted to offer the world of knowledge and ideas to kids who otherwise had no access to it.  I knew that literacy is fundamental to development. Initially, I had one library in mind, but when I saw the tremendous enthusiasm from booklovers in this country who wanted to do something concrete to make a difference.”

Chris studied African religion, law, and literature and traveled across Western and Central Africa while she was in college. During this journey, she became  inspired by the country’s generosity and ability to overcome challenges. Even as her time in Africa came to an end, Chris remembers, “That feeling of wanting to do something concrete never left me.”

Thirty-one years later, Chris took her family on a trip to southern Africa. They went on a pony-trekking in Lesotho.

“After a few days of riding, my son grew bored of just riding and began reading a book while riding, which reminded me of libraries. I asked our guide [about libraries in the country], he told me he thought Lesotho did have a library in the capital city.  Noodling along on our horses, I couldn’t stop thinking about having just one library in an entire country when too many books was actually a problem in the USA… When I returned to the village where we rented our horses, the head man told me they had always wanted a library but didn’t know how to get books.  There was no place to buy books in Lesotho and the cost was prohibitive in nearby South Africa.”

Once Chris got home, she got to work. “The process was just like a start up. I pulled from my prior experience running nonprofits and learned as much as I could from others.” In the beginning, Chris was collecting and shipping books herself, but she soon realized that wasn’t something she could maintain. So she began reaching out to local schools to help with the process and was very encouraged by their enthusiasm for helping and realized she could, “go from being a book drive organizer to organizing a nonprofit.”

She also built a community to help her build African Library Project. “So many people helped!  A techie friend of mine, Richard Hellyer, offered to help me do a website and sat on my first board.  My 16 year old son, Ben, wrote the application for our nonprofit status.  Sarah Stapleton, a Returned Peace Corp Volunteer who had started two libraries that failed during her service in The Gambia helped us figure out what our policies should be on the ground.  I recruited board members I thought possessed the skillsets we would need–finance, technology, library development in Africa, communication, etc. My first board had lots of passion, but didn’t know much  about how to be a good board member.  When Carolyn Gannon agreed to be my treasurer, she acted as a fantastic role model to the other board members and our board became more and more helpful.”

“Our first library was in a community rondoval in Malealea Valley in Lesotho near the Malealea Lodge.  I was super excited! I wanted to know everything that was going on.  Like…the first book that was ever checked out was an American Girls book.” African Library Project started five libraries that first year.

African Library Project has continued to prosper since and has a bright future ahead. . “I wanted to offer the world of knowledge and ideas to kids who otherwise had no access to it.  I knew that literacy is fundamental to development. Initially, I had one library in mind, but when I saw the tremendous enthusiasm from booklovers in this country who wanted to do something concrete to make a difference, I quickly dreamed of creating thousands of libraries. I’ve been especially inspired by the tens of thousands of children whose natural compassion have led them to become global literacy activists through book drives.”