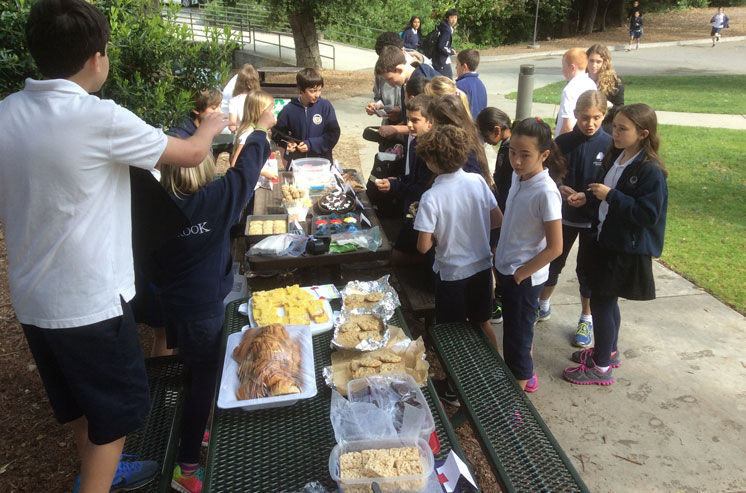 In April 2015, the 6th grade class at Hillbrook school held a book drive to help create two libraries in Malawi. Along with collecting the books, the 6th graders needed to raise enough money to ship the books to New Orleans where they would be put on a container ship and sent off to Africa. It was quite a sight to see the whole grade come together and work towards a common goal.

Ben Makarechian’s story: The massive process started with all of us students going home and collecting books that we either no longer needed or that we thought would be appreciated by the students in Malawi. Many of us went above and beyond what was asked by collecting books from our friends and neighbors too. I did this with my neighbors even though it was was super awkward going up to the guy next door who I almost never saw and asking him for children’s books. After all the books were collected, the 6th grade needed to find away to raise money to ship the books. The solution was to have the students coordinate a bake sale.  The many tasty treats ranged from chocolate chip cookies to home made baklava to s’mores on a stick (these were delicious, I am not ashamed to admit that I bought three and ate all of them in less than five minutes). After all the money from the bake sale (including generous donations for delicious treats) was collected and counted, we had raised  $590, just enough to ship one library worth of books across the ocean. However, more books from late donations and from donation boxes placed around town kept pouring in.

After all these new books were counted, it was discovered that we now had enough books for two libraries! This would have been great news, but we didn’t have enough money to ship an extra library worth of books overseas. Thankfully, after a generous donation from a school family, we had enough to ship both libraries of books.  Despite the triumph of coming up with the money, the students of 6th grade still needed to complete the necessary task of sorting and packing the books. It took a full week of students spending their mornings stacking books into piles and organizing them into boxes before all 2200 books were packed up and ready to go. I’m going to be perfectly honest with you, that part was not fun. We had try to fit as many books as possible into each box. That meant digging through the hundreds of books and trying to find the one book that fit perfectly into your not-quite-full-enough box. The final step was bringing the boxes full of books to the post office.   All in all, it was really amazing to see what all of us willing students were able to do to help those less fortunate than ourselves. This project definitely left an impression on me and all of my fellow 6th graders and showed us that we can help other if we are willing to put aside other things in life and devote ourselves to the cause.

Camille Mulcahy’s story: When the founder of ALP Chris Bradshaw came to talk to my grade on March 20th we got to learn a lot more of why she started ALP because lots of kids in South Africa don’t know how to read. I was really motivated to get books so they could start reading as soon as possible.

The first thing we did was to make three announcements at our Hillbrook’s flag assembly. After we collected 2200 books, we had a middle school bake sale and raised $590. We received a family donation to help us send two libraries. Before we sent the boxes of books, we went through each book and made sure they were appropriate and in good condition to send. After we went through the books we had parents volunteer to help us put the books in boxes. We had to tape the bottom of the boxes so they wouldn’t break and put garbage bags in side so the books wouldn’t get wet. Then we had to count them again, fill out a form for each box, then tape the boxes shut.    Something that really made me happy was that everyone in my grade was so interested in this project and wanted to help as much as they could. My motivation was that I get such a great education at Hillbrook and that I think everyone deserves a good education. Seeing pictures that Chris Bradshaw brought in of the villages and the bookshelves that had no books on them, really pushed me to try and make more than one library. If I could do this project again, I would love to.