This is what we want to do for Christmas 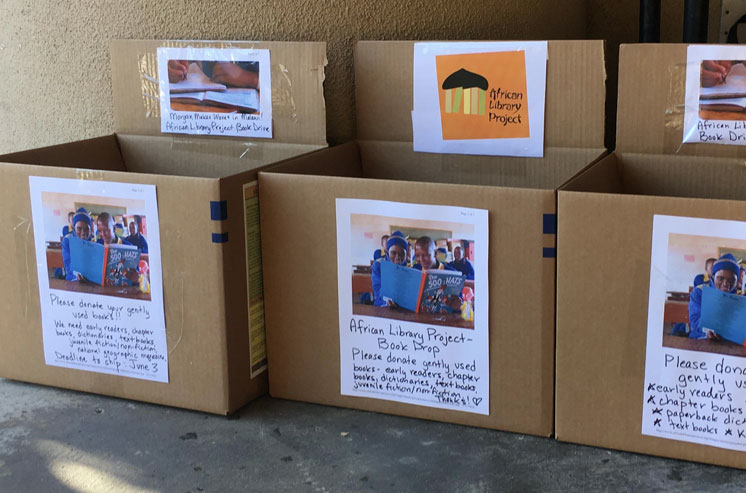 The family has helped her son’s South African school in a number of ways.  When the director of the school could not get books through Amazon, the family ordered some from the U.S. to send to the school.  And when Amie asked her son, “What do you want for Christmas,” his response was that he wanted to give presents to the other children in his school—chicken feed, money or books.

Once Amie learned about ALP’s work, she decided to do even more– a book drive for a library in Malawi with her two sons, one in middle school and Morgan, her first grader.

Amie used NextDoor to publicize the book drive to their neighbors.  They left a collection box outside their house for book drop-offs.  One woman gave them all her son’s childhood books.

Amie got not only her sons’ schools involved but also other schools in her Capitola, CA community.  She publicized the book drive through presentations to assemblies, posters that Morgan had made, articles in the schools’ newspapers and a place in the library on Back to School night.  She placed collection boxes in each of the schools

Out of town friends helped, too.  A friend in San Jose cleaned up her classroom.  Another friend drove down with a Land Rover full of books.  In fact, people kept dropping off so many books that she got more than she needed.  They kept going to create a second library in Malawi and one in Sierra Leone.

“Our local kids, teachers, and community members were so enthusiastic, generous, and supportive of ALP that we collected far more books than we needed to and were able to help supplement a few additional book drives as well.”

The whole family pitched in.  Morgan made a presentation to the kindergarten.  Her middle schooler encouraged his friends, explaining his experience in Africa.  When it was time to pack, her daughter came home to help.

They didn’t do a lot of fund-raising.  The family decided that instead of Christmas presents, they wanted the money for presents to be used for mailing and shipping.  Some family members sent checks to help. Her children said, “This is what we want to do for Christmas.”

Amie loves encouraging literacy and love of learning. She believes in the power of the written word. And she describes herself as a big fan of ALP and its incredible success and influence in encouraging literacy in the African communities it serves.  “This project gives us to a window to the world outside ourselves.  We have lost some of that.”

Amie has some tips for book drive organizers:

As Amie says, “The rewards of doing a book drive are tangible.  It seems like a small gesture, but it is an opportunity for the world. And the rewards come back tenfold, building self-esteem and the knowledge that you have contributed to the greater community, a world outside yourself.”