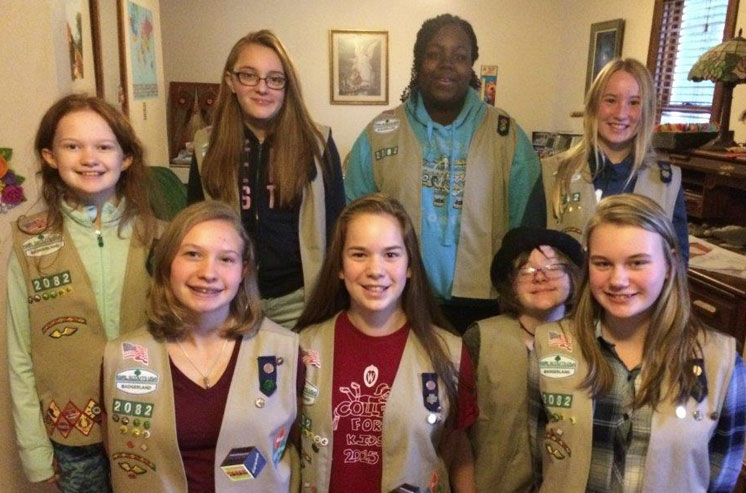 When Sheila Lenius, Madison, WI. Girl Scout leader, learned about how volunteers working with the African Library Project can create libraries, she could see that a book drive would be a perfect project for her daughters’ first and fourth-grade troops.

“I feel bad that there are schools with no libraries with no books, and we have so much in the United States,” she said. “Even children living in poverty in this country have more than the children in Africa.  I want to make a difference.”

Guest speakers who had lived in Africa talked to the girls about living conditions in Africa.  Their presentations, “opened the girls’ eyes about the world outside Wisconsin.”

Since the troops began conducting book drives, they have collected more than 11,000 books, creating libraries in six different countries, including Swaziland, Malawi, South Africa, Ghana, and Sierra Leone. They talked about the book drive in their classrooms and decorated bulletin boards in the school.  Many of the girls donated their own books.

Sheila reached out to principals in five different elementary schools; some principals allowed girls to talk about the book drive in their classes.  Sheila made a presentation in the lunchroom to the second graders.  She talked to teachers and school librarians for donations of books they would no longer use.  And she used NextDoor to let neighbors know about the book drive.  She says she is still hearing from others about books they would like to donate.

Clearly, one reason for the success of the book drives was her daughters’ selling skills. One year they sold more than 8,000 boxes of Girl Scout cookies, the highest number in the state of Wisconsin.  The proceeds from the cookie sales funded the troop’s activities.  One of those activities was a book drive.

With boxes of cookies and donated books filling up the house, Sheila had to create a safe path for walking from room to room.  Instead of holding a packing party as many book drive organizers do, she recommends packing the books as they come in, labeling the number of books on the outside of the box.  “It is an easy system,” she says.

As she talks to her troop about the impact of the book drives, she tells them that the books they collected four years ago are still being read and will continue to be read.  “You have touched the future,” she tells them.

The book drives have impacted troop members in a variety of ways.  They have sent letters to children in a village in Malawi and received thank you letters back.  A church member who lived in a village in Sierra Leone where their books were sent brought the girls pieces of chocolate after the books were delivered.

And the girls have realized that they could visit the countries where they have created libraries. They might see elephants.  They will definitely see that they have made a difference.