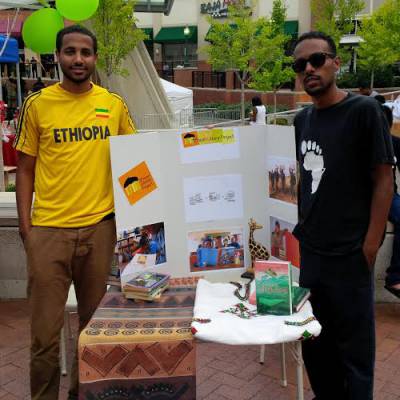 Congratulations to Amday and his fellow students on the completion of their first African library through the strength of their student organization Unite Africa.  It can be a lot of work to complete one, but getting as many people as possible involved makes it much easier to collect the books and raise the funds. Learn how these college students are making a difference in their own communities and around the world.

Amday Wolde, Tamerat Yilma and Kwesi Bartels are college students at the University of Maryland who are pursuing careers in medicine and engineering. Kwesi and Amday are first generation Americans of Ghanaian and Ethiopian descent, respectively. Tamerat was born in Ethiopia and came to the states for school. They all share a common love for Africa and recognize that access to books is key to helping Africans succeed.

Amday was one of the co-founders of Unite Africa, a student organization formed with the desire to empower Africans through education and literacy.  Before even hearing about the African Library Project, this organization collected gently used children’s books with the intention of sending them to Africa where they could do some good.  Once the books were collected, there were some issues that confronted the organization. Amday relates that they were worried the books wouldn’t reach the intended destination, or that the communities wouldn’t be properly equipped to distribute the books to the children and teachers who need them most.  He literally googled “sending books to Africa,” stumbled across the African Library Project, and signed up to start a primary school library in South Africa. He felt really good knowing that the African Library Project is committed not just to collecting and shipping books, but to working with organizations that train librarians and ensure the books are put to good use in the communities where the books are shipped.

Amday has done a lot of local charity work through his fraternity, as well, working with inner city youth in Baltimore.  When he visited Ethiopia, he was struck by how similar some of the problems and solutions really are.  He believes that children are the future of the world, and that the only way to produce change is to educate and inform them.  Amday is tailoring his career path toward serving others and making a difference.  I’d say he’s already well on his way.

Amday encourages other college students to get involved by presenting the African Library Project to campus student organizations that have service and Africa-based missions.  This is critical: most people don’t start the way Amday did, with the first-hand knowledge that Africa needs more books.  They start libraries because they hear from their friends, like you.  Doing and telling are two important ways to make a difference.